Is it time we called it “laborious intelligence”?

I stand by the window at my parents’ house and watch the robotic lawn mower trundle across the grass. It reminds me of the Kiwibots, those small self-driving robots that deliver food on campus at Stanford and other universities. At some point it was revealed that the robots were in fact remote controlled by people in Colombia, so I wonder whether the robotic lawn mower is also being controlled by someone.

My young daughter, who is watching the mower with me, cries out every time it disappears from view. I’m reminded of Joseph Weizenbaum. Back in the mid-1960s he developed ELIZA, the first program that enabled users to interact with a computer as if it were a human being. One of ELIZA’s applications was the doctor program, which involved the computer posing as a therapist. Triggered by keywords, it asked simple questions that encouraged the user to continue talking. Thanks to this trick, the relatively simple software program enjoyed great popularity as a conversational partner. Weizenbaum later recounted with dismay how his secretary asked him to leave the room so that she could talk to ELIZA in private, even though she knew it was a computer program without any kind of consciousness or ability to understand what she was saying.

Today, almost 60 years later, computer programs have changed. Siri and Alexa actually listen to us. They care for us and seem to have a soul. However this has nothing to do with an intelligence explosion, but rather with the fact there are actually people working behind those personal assistants, whose job is to listen to us and transcribe any commands that can’t be automatically decoded. They optimise the algorithms for our next conversation with the personal assistant. 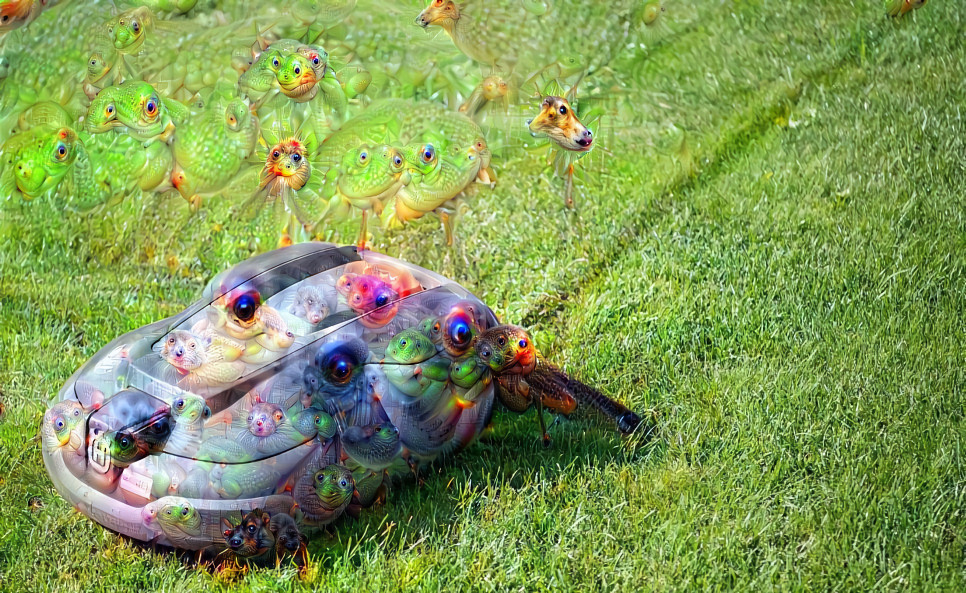 That’s why I have come to the conclusion that over the past few decades, we have not developed artificial intelligence, but instead something that from now on I would like to call ‘laborious intelligence’. Why laborious? Because at its core it is powered by the work of people who I’ve described elsewhere as human software extensions. On digital platforms they can be hired with a click to serve as thinking units and bodies in the real world that extend the algorithmic systems―and they can be fired just as easily. People who bring us food or clean laundry are as much a part of this group as those who sit in Columbia and control allegedly autonomous robots in California. Global networks mean that these people are always available as software extensions regardless of time and space.

They not only perform the laborious work of manually transcribing our conversations, they also annotate vast amounts of photos and videos. They outline all the objects, describe the situations and analyse behaviour and emotions. This data is then used to train the algorithms of neural networks. Yet in order for laborious intelligence to keep pace with an ever-changing world, more and more data must be annotated and with ever-increasing precision. Laborious intelligence constantly generates more work.

In 2017 Google hired clickworkers to mark buildings, trees and other objects in images. Without knowing it, this army of freelancers scattered all around the world were helping algorithms train for a Pentagon operation called ‘Project Maven’. The aim of the operation is to use artificial intelligence to wage algorithmic wars.

Digital copies: Always one step ahead

The robotic lawn mower is returning to its charging station in the shed. It seems to have finished its work for the day. As I gaze at it, I wonder about the effects of this ‘competition mode’ that appears to structure laborious intelligence.

To perform its assigned tasks, laborious intelligence relies on armies of bodies who supply data for the algorithms. At the same time, these algorithms serve as managers and taskmasters to those who are training them. The result is an amalgamation of human and technological infrastructure that is constantly improving its efficiency and productivity by making its constituent parts compete against each other.

Amazon’s warehouses come to mind, where the productivity of all the employees is monitored using algorithms, and letters of termination are automatically generated for whose are not as fast as their colleagues. To speed up this competition, Amazon provides free pain killers. Similarly, Percolata, whose clients include Uniqlo, uses sensors to monitor shop staff in order to determine their productivity and give them rankings. And IBM uses its AI platform Watson to predict the development of its employees and adjust their salaries accordingly. Crucially, the criteria used to rate and eliminate workers are not static. A certain level of performance is required and if it is achieved, the expectations placed on everyone are once again raised slightly higher. It’s a race to the bottom supervised by algorithms.

Something is not right. The lawn mower has arrived at the shed, but it’s having trouble driving through the small opening into its charging station. It keeps on trying and either bumps into the wall or, just before it reaches the opening, turns around and heads back into the garden. It seems trapped in a loop of unsuccessful attempts.

I regain my train of thought: Laborious intelligence operates like a system, but shifts any responsibility to individuals. Problems must be solved through the optimisation of individual skills, even if the finishing line never comes within reach.

Laborious intelligence generates and requires losers. It consists of global armies and infrastructure, but reacts to trouble and hardship in specific places and knows how to exploit that hardship. That’s why workers in crisis-ridden Venezuela are currently in great demand among German manufacturers, who need people to generate training data for their self-driving cars. Yet such relationships are inherently unstable, as laborious intelligence always moves on to wherever human software extensions are even cheaper. Laborious intelligence generates and concentrates wealth and profits in only a few places and for a few individuals.

AI training processes and competitions lead to the creation of models that can be carried out by computers and which ultimately shape the reality of our lives. They reproduce existing rules about winning and losing. Disadvantage, exploitation and racism are coded into their structures and perpetuated by them.

Caring for each other takes effort

Meanwhile my father has joined me at the window. He glances back and forth between the lawn mower and his phone, which shows the status of the device. The robot appears to be out of control, it performs a dance that is both absurd and entertaining. And yet, at some point, it finally makes it back to its charging station. I catch myself wondering what this laborious intelligence actually has to do with me. Does it make a difference if the lawn mower is remote controlled by invisible people? Or whether it is based on algorithms developed in precarious working conditions? Or if it’s just following simple, pre-programmed rules?

It seems to me that laborious intelligence always exists as a relationship. This means that my convenience is quite often someone else’s labour, even if talk of ‘artificial’ intelligence would have us believe otherwise. This isn’t necessarily a bad thing, after all, work can also be well paid and provide other securities and benefits. But in order to ensure at least this, we need to understand what the new, life-like qualities and intelligence of networked artefacts are all about and what is hidden behind the smooth interfaces of our apps. We can only counteract the systematic and algorithmic production of countless losers and a handful of winners if we can overcome the division of the invisible AI workforce and start thinking about laborious intelligence as a system. After all, laborious intelligence could be something that we practice and possess together. Laborious thinking about one another and equally laborious helping each other out.

Even though the robotic lawn mower provided excellent entertainment for my daughter, I ask my father why the robot does not complete its silent mowing rounds at night. He replies that the lawn mower might leave the lawn area and fall down the embankment. There, at the edge of the forest behind my parents’ house, it would lie idly on its back, unable to return to the garden or escape into the forest.

While Joseph Weizenbaum was developing his ELIZA program in the 1960s, Douglas Engelbart and his team were busy designing the first graphical user interface for computers. He was not trying to produce an interface that would enable a human-style conversation. Instead, he was working on tools that would allow society to increase its collective intelligence. Decades ahead of his time, Engelbart developed a user interface that enabled users in different locations to work together. He even took a collaborative approach to his work with the computer itself, believing that the user and the computer should grow together and enable each other to acquire new skills. No signs of convenience or competition here.

As I lay in bed that night, I’m distracted by something I’ve noticed. The less life my parents have left, the more alive their house seems to become. One day it will be devoid of humans, occupied instead by networked devices and algorithms through which the habits and quirks of my parents will live on.

This text was commissioned by Goethe Institut for Kulturtechniken 4.0’s ethics section. Translation by Brianna Summers